And also this one...

According to The Book Bench (New Yorker blog), PD is PD is "2008’s Best Novel About Doing Battle with Microsoft Word and Losing"!

An eerily prescient tale of layoffs; think “Alien” set in an office, where computers are stealthily self-destructing and people keep disappearing from their cubicles, leaving vast empty warrens of corporate debris. Did I mention that it’s deeply, bitterly funny?

Coming to a book jacket near you

Hyphen lists PD as one of the "Other Dope Fiction Books by Asians."
Posted by Ed Park at 9:55 AM No comments:

Can't wait to clock in for supper

In September, Ketzel Levine, a senior correspondent for National Public Radio, came up with an idea for a series about how Americans were handling economic pressure....

Ms. Levine and her editor didn’t want a series of unconnected stories. “We came up with the idea that each person should be connected with the next somehow, and that was the best part for me,” she said....

But there was an unexpected ending. Midway through her reporting, Ms. Levine found out that she had been laid off as part of a 64-employee cut at NPR.

Ms. Levine, who has worked at NPR since 1977, said she decided the final episode, and her final piece for NPR, should be about her own situation. 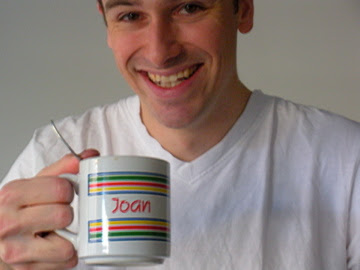 Personal Days is a "tornado of increasing tragicomedic build-up that sucks you in and vomits you into a better place. Some killer one-liners in there. Tangentially lost my iPod because of this book."
—Yellow Redneck Blues
Posted by Ed Park at 7:40 AM No comments:

do not use force quit/cancel-force quit to manipulate your computer- i am pretty sure i broke mine today.

An hour or two ago I dreamt that I and some coworkers were missing our top rows of teeth. On the bare gums in the tops of our mouths, we wore "reversible" dentures. If we wore the dentures one way, it looked like we had a perfect row of white teeth. If we flipped them around and wore them the other way, it looked like we had a row of perfect off-white teeth.... —Crude Futures
Posted by Ed Park at 9:38 PM No comments:

One of the notable events in recent literary history was a modest bump in the number of novels about white-collar work. The two most heralded were, significantly, debuts: Joshua Ferris' Then We Came to the End and Ed Park's Personal Days. Both young authors, possessed of little experience besides what their cubicle daydreaming and job insecurity had supplied, they exploited the potential of office spaces to their extreme, and the immediate response these novels elicited from reviewers was: "more!" We needed more novels about bagel brunches, useless meetings, excessive coffee drinking, awkward exchanges, e-mails and layoffs. We were to re-experience what so many of us went through every day, to know it as pain, to see the expression of that pain among others as a form of solidarity.

—Nikil Savil, for The Millions' "A Year in Reading"

(From Uncertain Times)
Posted by Ed Park at 11:52 PM No comments:

WoW! We're not going to hire you!

I met with a recruiter recently (online media industry) and in conversation I happened to mention I'd spent way too much time in the early 2000s playing online games, which I described as "the ones before World of Warcraft"....

He replied that employers specifically instruct him not to send them World of Warcraft players. He said there is a belief that WoW players cannot give 100% because their focus is elsewhere, their sleeping patterns are often not great, etc....

(Via BoingBoing)
Posted by Ed Park at 7:35 AM No comments:

Stella: How to Throw a Budget Holiday Party

The author's secret life?
Posted by Ed Park at 7:10 PM No comments:

Books of prose I recently finished that I keep thinking about are Ed Park's hilariously-and-sadly-perfect-for-our-times Personal Days. I also loved Kelly Link's Magic For Beginners....

Samantha Hunt—wizardly author of the novels The Seas and The Invention of Everything Else—chooses Personal Days as one of the best books of 2008:

In "Personal Days," Ed Park's dark, dark humor captures the slow death-spiral of a company and the workers still living in its decay. As they are summoned by human resources, the still-employed huddle around their monitors like some post-apocalyptic campfires, writing screenplays, Googling themselves and generally acting far more clever than anyone in charge. Sadly, the book is timely.
—Louisville Courier-Journal

If you've ever worked as an office drone, Ed Park's Personal Days will make you both laugh and cringe with familiarity. Park perfectly captures the fear and loathing towards middle management, email blunders, and existential anguish of the New York cubicle grind. —Hyphen
Posted by Ed Park at 1:44 AM No comments: 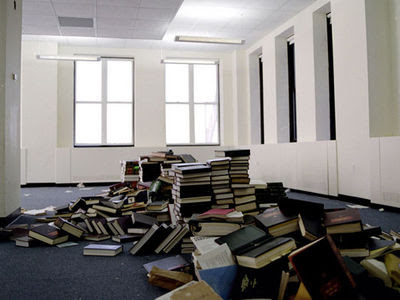 The book/office photos of Philip Toledano.

*One commenter links to Britt Salvesen's excellent piece on office photography in the latest Believer. (Subscribe!)
Posted by Ed at 8:21 AM No comments:

...Commonweal includes it in its Christmas Critics roundup—click here to see...

Park shows both the cramped spaces and bizarrely profound social investments we make in our co-workers' lives by telling the stories of a dozen mid-level employees of a moribund company, marooned on an increasingly empty floor of a New York high rise. Together, they're bound in anxiety over losing their jobs, excitement at the sudden independence of being fired and terror of doing anything to draw attention to themselves. Oddly, this semi-oblivion engrosses them. The best jokes come from the office. So do the freshest ironic nightmares. It's the most entertaining thing they have, but no one wants to ask too seriously if perhaps that's because it's all they have. —Et Tu, Mr. Destructo?

[I]t is the small tablets with tiny writing that are the most tantalising objects in Babylon, Myth and Reality (at the British Museum until 15 March). Can one, through them, get beyond archaeological evidence and inference, bypass the fevered imagination of William Blake’s and John Martin’s Bible illustrations and hear the voice of a Mesopotamian Pepys?

Well, not exactly, but the range and character of what is written down give some idea of the texture of everyday life in Nebuchadnezzar’s Babylon. The majority of tablets may be the equivalent of office files – letters, legal documents, contracts, mortgages, lists of goods – but there are also messages addressed to the gods, some of them expressing indignance that good behaviour has not been rewarded. —Peter Campbell, LRB

(From Margaret)
Posted by Ed Park at 8:45 PM No comments:

TIME to get "Personal"!

Personal Days joins books by Roberto Bolaño, Jhumpa Lahiri, Neil Gaiman, and others on Time magazine's list of the Top 10 Fiction Books of 2008!

Read the full article here, and buy copies of PD here.
Posted by Ed Park at 6:39 AM No comments:

This book, Personal Days, totally nails the particular weirdnesses of working in an office, how days blend into days, years blend into years. That weatherless timelessness. What a curious book to be reading this week, too, as the news is all so very dire -- recession, the publishing industry, joblessness, blah blah. Just like the people in the book, you can hate your job and still be so thankful for it. —Moonlight Ambulette

At least it ranks higher than The Key to Metal Bumping: An Instructive Manual of Body and Fender Repair Practices.
Posted by Ed at 8:41 AM No comments:

The L Magazine recommends Personal Days as a great holiday gift idea.
Posted by Ed Park at 12:17 PM No comments:

"Made during company time"

Gawker offers "five elements of today's memos that illustrate everything you corporate flacks need to know about firing people like us."
Posted by Ed at 1:34 PM No comments:

Franz Kafka wrote as insurance against suffering the fates of his characters. It was as if every hour he spent writing, by candlelight and, later, by electric light, was an installment paid against darkness. He knew that with a stroke of the pen he could conceivably, at any time, have restored to Joseph K. his easy life before The Trial, and obtained for land surveyor K. a better position with a gentler Castle. But this is what makes Kafka the great writer of what has been called Modernity: That he stayed true to his fictions, and retained their tragedy.

(Correction made: Nextbook, not The Forward!)
Posted by Ed Park at 5:24 PM No comments:

The Independent (UK) names Personal Days one of the "50 best winter reads"!

Smartly of-the-moment, this is office life at its best and worst: the "instant folklore" of the internet age ("when you feel a tingling in your fingers it means that someone?s Googling you"); the modernist poetry of an email inbox; the weird of experience of being a boss: "Every night, the chances are that at least one of [your staff] dreams of you."