"Take This Job and Write It" 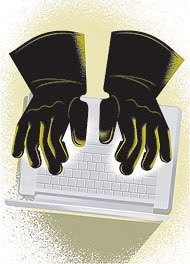 "Joblessness may be hovering around 10 percent, with some 29 million Americans out of work or searching for full-time employment, but there’s one group of people whose persistent alienation from regular employment has emerged as a particularly serious problem. I refer, of course, to novelists."

The New York Times Book Review's Jennifer Schuessler writes about Personal Days and other books about work.
Posted by Ed Park at 7:03 AM No comments:

Whatever Reitman's original intentions, Up in the Air has become a movie about its own significance. The director, an avid believer in his own press, has suggested that it is nothing less than "the portrait of 2009." I honestly don't know what the film has to say about 2009—other than that it's kind of tough out there—and my guess is that Reitman's claim (which echoes the abundant critical praise for the movie's "eloquence" and "prescience") has something to do with the long history of evasion and denial in American cinema when it comes to matters of work and the workplace.

The first film in history was an 1895 short by the Lumière brothers with the self-explanatory title Workers Leaving the Factory. In the years since, as if in deference to their function as a leisure activity, movies have been largely blind to the daily rituals of work and the meaning it has in our lives (unless the characters are, say, detectives or assassins). Documentaries are the exception, as are sporadic outliers like Mike Judge. There is a kind of bracing novelty when a big movie with a glamorous star so much as glances in the direction of the real working world, where people toil, lose jobs, and struggle for survival (and have done so since long before 2009).

—Dennis Lim on Up in the Air, Slate
Posted by Ed Park at 7:30 PM No comments: