Corrections: I Put In 5 Miles at the Office 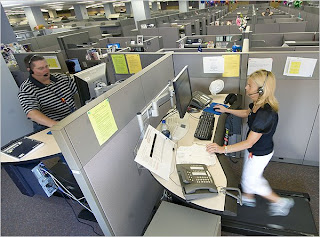 An article last Thursday about desks that include treadmills stated that Dr. James Levine, an endocrinologist at the Mayo Clinic, invented the first known treadmill desk. After the article was published, Seth Roberts, an emeritus professor of psychology at the University of California, Berkeley, pointed out that he had created such a desk in 1996, eight years before Dr. Levine.